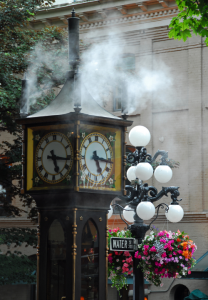 Summer sun, sea and mountains – mix in world class sophistication and hello Vancouver! Put on your shades, sunscreen, and cool dress to get ready to experience all that the City of Vancouver has to offer.

At Jericho Beach, a mere 20 minute drive or an hour walk from downtown, discover a long sandy west coast beach with panoramic views of the City’s skyline against the backdrop of the glacier tipped North Shore mountains, the seaside pathways of Stanley Park, and the sailboat haven of Bowen Island and the Staight of Georgia. Soak up the sun and read a book, join a beach volley ball game, or have lunch at the Galley Patio and Grill offering million dollar views and student prices right on the beach. Or simply hike to Spanish Banks, the beach’s more remote treasure. For the cyclists and runners among us, continue up the long gradual hill to the grounds of the University of British Columbia (UBC) and discover some of this hundred year old school’s jewels including the recently renovated, world-renowned Museum of Anthropology, the internationally acclaimed Chan Centre for the Performing Arts, the Nitobe Japanese Memorial Garden and UBC Botanical Garden and Centre for Plant Research. Oh, and let’s not forget Wreck Beach for those so inclined!

If you would rather stay downtown to experience outdoor living on the west coast, enjoy a meander, walk, run, cycle, or rollerblade around Vancouver’s seawall, which isn’t just an 8.8 km trek around 1,000 acres of one of the world’s greatest green spaces, filled with cedar, hemlock and fir trees, home to wildlife abound (including the Vancouver Aquarium). The Seawall connects you from Stanley Park to English Bay, Yale town, False Creek, Canada Place, and the award winning state-of-the-art Vancouver Convention Centre.

If both of these options seem a bit ‘tame’, experience ‘Mother Nature’s Stairmaster’ and hike the Grouse Grind, a 3 km steep hiking trail that climbs 850 metres to the top of Grouse Mountain. Your reward at the top, beside the amazing vista, is a long cool locally brewed beer or glass (or two) of BC wine at the outdoor patio. This time, glimpse the world of Vancouver from a bird’s eye view from downtown Vancouver all the way to the surrounding islands, the Sunshine Coast, Mt. Baker, and Vancouver Island. If the Stairmaster is not for you, then the Gondola ride will whisk you to the top of the Mountain, which was aptly named in honour of a blue grouse bird shot by a hunting party in 1894.

After these energetic adventures, cruise the streets of Yaletown, Robson Street, Gastown, and the Waterfront to indulge in culinary delights from around the world in trendy, first class restaurants. In fact, Conde Nast Traveler recently named Vancouver home to the best Chinese food in the world!

Planning an exhibition or festival in Vancouver? All the places and activities mentioned in this article can accommodate groups from ten to thousands of people. And of course, there is so much more that makes Vancouver Hot! in the summer!